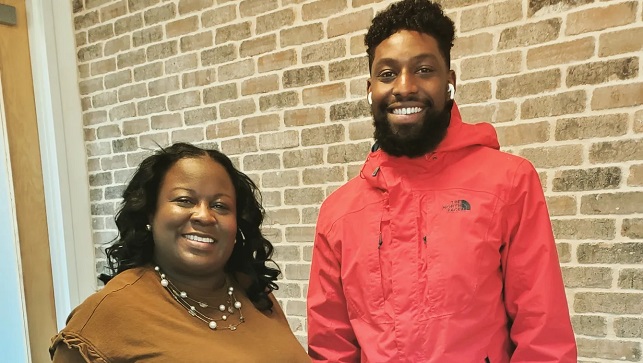 The GAHBA’s DeKalb/Rockdale Chapter kicked off 2022 with a lunch meeting on January 11 at the association office in Dunwoody. The meeting, which was sponsored by Construction Resources, featured a presentation by DeKalb County officials Andrew Baker and Maria Houser, who joined the meeting virtually.

Baker, Director of Planning and Sustainability, discussed some of the current issues affecting builders in the county, including COVID restrictions and county-specific building codes, as well as gave an update on some upcoming developments in the area. DeKalb County offices are still not physically open, but Baker explained that they remain open virtually, and he encouraged the group to utilize the county’s website to complete tasks. “We’re continuing to try to work with the new normal,” Baker said. Despite some challenges and limitations, he said his office issued more than 13,000 permits and completed more than 25,000 inspections last year. Baker also provided tips for submitting applications more efficiently, including building good working relationships and maintaining clear communication with county staff.

In addition to on-going efforts in affordable housing, revitalization, and sustainability, Baker said DeKalb County is placing a heavy focus on transportation, with upcoming interstate improvements and new mass transit options. Baker said the film industry also continues to be a driving force in the county, with several new and existing film studios, including Blackhall Studios, which once it completes its current construction expansion will be the largest studio complex in the state and one of the largest in North America.

The meeting’s second guest speaker, Maria Houser, is DeKalb County’s first Director of Consent Decree and Environmental Compliance. GAHBA Government Affairs Chairman Tiffany Hogan of D.R. Horton introduced Houser, stating that her background as an engineer and attorney makes her an exceptional fit for her role with the county. Houser gave an update on the recent modification to the consent decree, which she said allows additional pathways for connecting to the sewer system. She then answered questions and addressed concerns from the group on issues they have experienced with the consent decree.

This was a great kick-off to the year for the GAHBA! Stay tuned for details about the DeKalb/Rockdale Chapter’s next event, which will be a joint social with the Inner Atlanta Chapter in March!