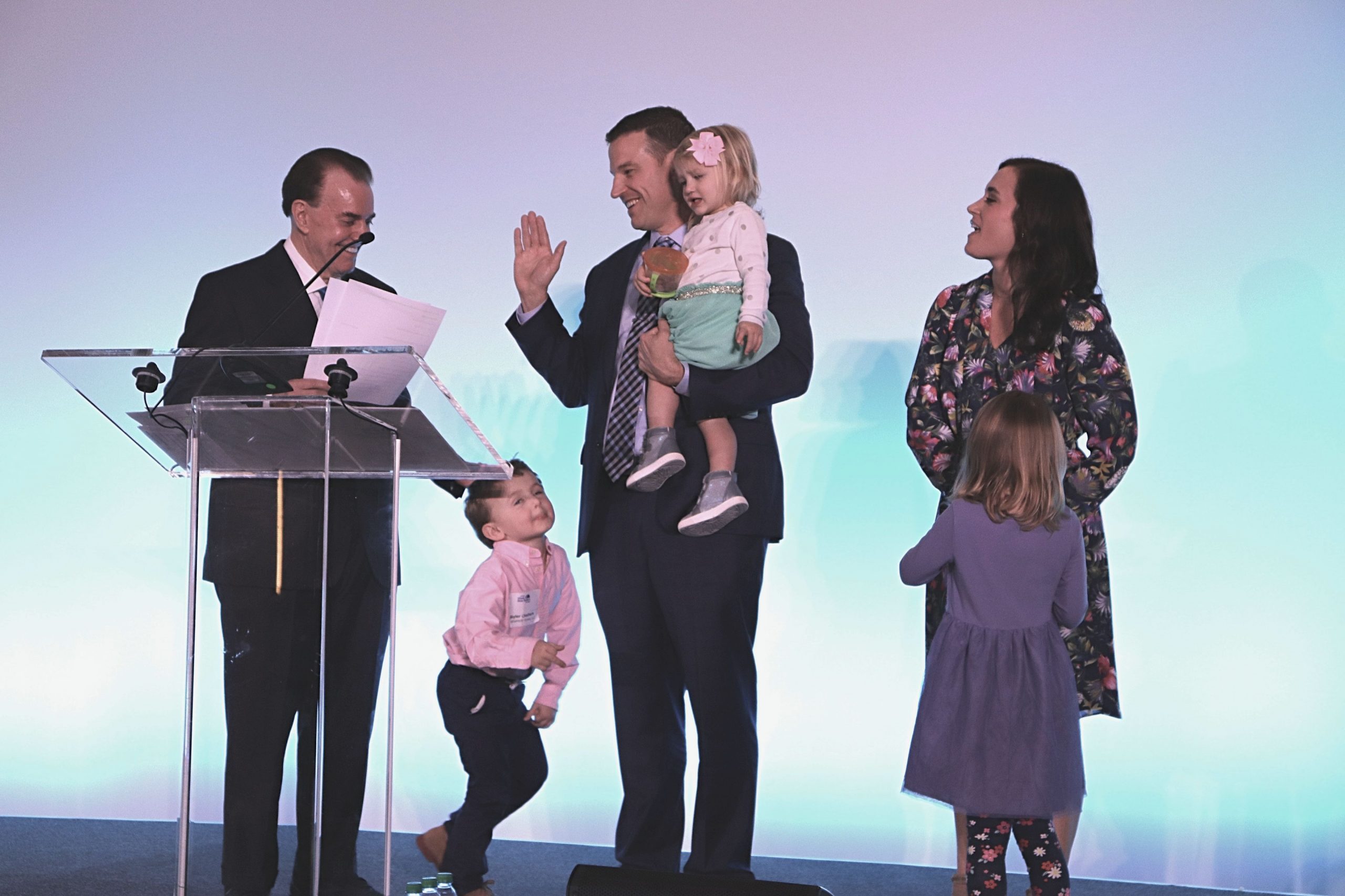 ATLANTA — The Greater Atlanta Home Builders Association (GAHBA) kicked off its 75th anniversary and installed its newly elected officers and board members during the annual Installation & Awards Ceremony on Wednesday, January 15th, at the Omni Hotel at the Battery.

During the ceremony, Gabe Chatham, Vice President of Chathambilt Homes was installed as the 2020 GAHBA President, and w as sworn in by his father, David Chatham, w ho served as President of the association in 1985 and is a past recipient of the GAHBA’s prestigious Lew is Cenker Award for lifetime achievement in the industry.

The Chatham family has deep roots in the local home building industry. Gabe’s grandfather, Howard Chatham, began building homes in 1948 in Buckhead. Since then, the company has built thousands of homes and developed hundreds of neighborhoods in the Atlanta area. Chathambilt Homes is now one of north Atlanta’s most awarded real estate developers and builders. Gabe has dedicated time to the association in many capacities, most recently serving as the Membership Committee Chairman and North Fulton Chapter President.

In his speech on Wednesday night, he outlined his three main initiatives for 2020: raising the profile of the association, developing the next generation of trades and expanding the reach of the GAHBA education programs.

“As an association, w e are a family. We are better together,” said Chatham. “We need each other to succeed and be at our best. We encourage each other, we challenge each other and when we work together we win together.”

In addition to installing the 2020 board members, the GAHBA’s award winners for 2019 were also recognized during the ceremony:

Builder of the Year: Jim Chapman of Jim Chapman Communities
The Builder of the Year Award is presented each year to a member of the GAHBA w ho has both demonstrated a commitment to professional excellence while also making significant contributions to furthering the goals and mission of the association. Jim Chapman launched his first custom home building firm in 1998, then in 2005, shifted his focus from building single-family custom homes to developing and building 55 Plus active adult resort-style communities. Now Jim Chapman Communities is recognized as Atlanta’s premier 55 Plus homebuilder, In 2019, he served as the Immediate Past President of the Greater Atlanta Home Builders Association, Vice President/Treasurer of the Home Builders Association of Georgia, and the Vice Chairman of the NAHB Land Development Committee. He w as named “2018 Builder of the Year” by HomeAid Atlanta.

Associate of the Year: Dave Morgan of Truist
The Associate of the Year Award is presented each year to a member for their accomplishments in the areas of service to the industry and association, professional excellence and community involvement, furthering the mission and goals of the association. Dave Morgan served as a board member for both the Dekalb/Rockdale Chapter and Cobb/Cherokee Chapter as w ell as being an active participant on the membership committee. He played a crucial role in the success of the GAHBA by getting other volunteers involved as w ell as providing sponsorships for various events.

Lewis Cenker Award: John Cooper of Cooper Homes
Established in 1984, the Lew is Cenker Award is the GAHBA’s most prestigious award honoring an individual’s lifetime achievements and their contributions to the advancement of the housing industry. This award is named in memory of one of the industry’s icons – Mr. Lew is Cenker w ho w as President of the Association in 1960 & the only member of the GAHBA to serve as President of the National Association of Home Builders. John Cooper has been a vital member of the association for over 20 years. He is a Past President of the association as w ell as a Life Director. He is a decorated OBIE Award w inner and the recipient of the 2012 Builder of the Year Award. He served as the President of the DeKalb Chapter in 2009 and that same year w as honored as the GAHBA’s Chapter President of the Year. His company has been in operation for over 33 years, and during this period he has built a reputation of quality and value throughout the Metro Atlanta area. He is also proud to be a Certified Professional Home Builder (CPHB) and member of the EarthCraft program.

Presidential Awards: Amy Buynoski, CenterState Bank Mortgage & John Royer of O’Kelley & Sorohan
The Presidential Award is the only award presented at the discretion of the President, making it a special acknowledgement of an individual’s commitment and service to the GAHBA and the home building industry. The first Presidential Award w as presented to Amy Buynoski, a mortgage professional with over 20 years of experience in the industry. She served as Chairman of the Sales and Marketing Council and was the guiding force in creating the most successful OBIE Awards Program in recent years. There w as record attendance in recent years with 700 guests and outstanding member engagement. The second Presidential Award winner was presented to John Royer. He has been involved with the HBA and SMC since moving to Atlanta, serving on the SMC board since 2012. He accepted the task of co-hosting the 2019 OBIE Awards and was a Corporate Sponsor during the year.

Council Chairman of the Year: Bradley Hall of Hall Design Build
The Council Chairman of the Year is presented for outstanding excellence and member service. The GAHBA has five active, dynamic councils that provide education and networking opportunities for several of the diverse special interests of its members. Bradley Hall lead the Remodelers Council to be the fasting growing Remodelers Council in its class nationwide w here it w ill be recognized at the International Builders Show . He cultivated a board of directors for the remodelers council that along with assistance from staff, held 2 successful education lunches, one very successful bow ling tournament with over 80 participating, and 2 additional networking socials throughout the year. It experienced a 92% growth rate nearly doubling from where it began the year. He also w as a HomeAid Project Leader for the kitchen repair project at Rainbow Village in April.

Chapter President of the Year: Steve Cash of Cash Homes
The Chapter President of the Year is presented for outstanding excellence and member service. There are currently seven chapters representing nine counties and the City of Atlanta that all provide educational and networking opportunities specific to those nine counties. Steve Cash served as the President of the Metro South Chapter. He also serves on the Home Builders Association of Georgia Board of Directors, as a B-PAC Trustee, and is an active member of the GAHBA Government Affairs Committee. Under his leadership, the Metro South Chapter held 4 very successful Chapter Lunches averaging 60 attendees per lunch with speakers such as the Mayors of local municipalities on the southside, County Commissioners, and economic updates from Eugene James. In addition, Steve Cash lead a group of Metro South chapter members to participate in the HBAG Legislative Day at the Capital.

Spike Award Winner: Bill Lisecki of Adams Homes
The Spike Award is presented to the member w ho has the most recorded number of new members throughout the calendar year. Bill Lisecki recruited 12 new members to the Association during the year. His effort along with that of the membership committee and board members is w hat enabled the GAHBA to grow another 3.5% in 2019. Bill is entering his second year as President of the North Fulton Chapter.