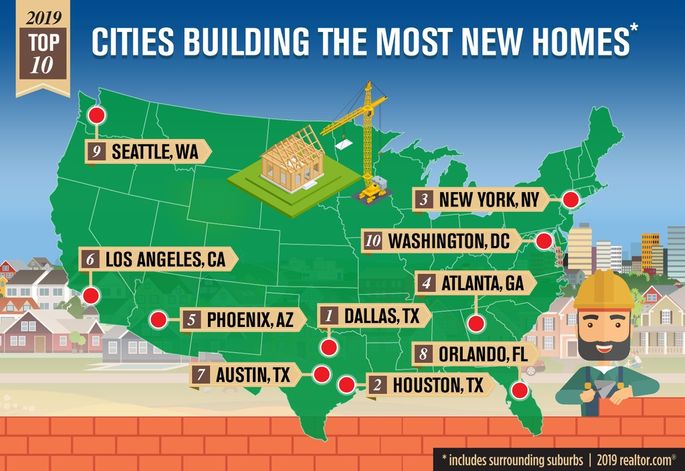 01 Apr These 10 Cities Will Dominate Home Construction in 2019

Written By: Lance Lambert of Realtor.com

Home construction across the United States is slowing down—and the timing couldn’t be worse.

The country is already at its lowest point in a decade for housing affordability, due largely to the shortage of homes on the market. In February this year, according to U.S. Census Bureau data, 9.9% fewer homes than a year ago had been started but not yet completed. The lack of newly constructed homes is only exacerbating the crisis.

But hold on! There are still a number of markets in the country where foundations are being poured, frames are being erected, and contractors are contracting, everywhere you look. The realtor.com® data team went out and identified these boom towns for new construction. These tend to be high-demand metropolitan areas* with plentiful gigs, lots of amenities, and ample room to grow.

“Adding new homes is key to a city’s economic health,” says Robert Dietz, chief economist of the National Association of Home Builders. Much of the new construction he’s seeing is in the South and Southwest, where land and construction labor is cheaper and there are fewer costly and time-consuming building regulations. (New York City and Los Angeles, our outliers, made the list simply because they’re so darn big.)

Despite the fact that new homes tend to be more expensive than existing ones—about 26% pricier, thanks to high labor, materials and land costs—they help to keep runaway home prices at least somewhat in check by providing buyers with more options. It’s the housing circle of life: “Markets that add inventory keep housing affordable and in turn attract more businesses and startups in those areas,” says Dietz.

To come up with our findings, we analyzed census data to figure out where builders scored the most residential construction permits. The permits are for single-family homes, condos and co-ops, apartments, townhouses, and duplexes. They’re not an iron-clad guarantee that new housing will be completed an average of seven months later. But they’re the best indication that it will.

So where is building booming?